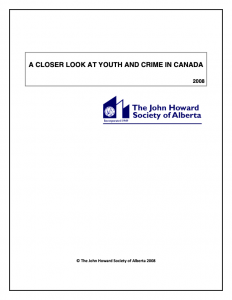 The Canadian public’s perception that the youth crime rate is a growing phenomena in society and that communities are increasingly vulnerable to violent criminal behaviour by young people is one that is unfortunately reinforced by external sources. Sensationalized media coverage, frustrated law enforcement officers and vote seeking politicians have tended to portray only parts of the overall reality of crime in general, and youth crime in particular, over the past two decades or more. This paper examines the most current statistical evidence for youth crime in Canada (decreasing) and focuses particularly on reviewing the evidence of violent youth crime. It reviews the types of violent crime in which young people engage and at what ages, and finds that Level 1 assault is the most common variety. The paper concludes with a review of some ground breaking initial results reported from a Calgary study which profiles young offenders over a 7 year period.